No one wants to miss this Kumbh

No one wants to miss this Kumbh
Clean Media Correspondent 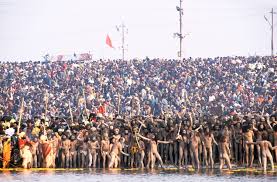 What a great occasion it is! 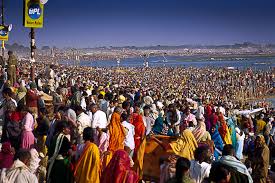 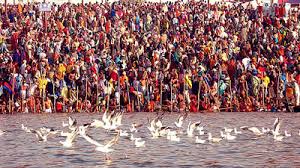 ALLAHABAD, Feb 10 (CMC)The once-in-12-years MahaKumbh at Prayag in Allahabad is an occasion no devout Hindu wants to miss. While the elderly wish to take a dip at least once in their life time, many others want to experience the electric atmosphere to believe what they have learnt from mythology.

But this year's Kumbh in Allahabad is more than a mere religious gathering, that too for only Hindus. It has emerged as an important platform for politicians and entertainment personalities to achieve what is important for them. Of course, for countless film-makers, photographers, businessmen and of course journalists it is an opportunity they won't miss for anything.

The ritual bathing started at Kumbh on January 14 (Makar Sankranti day) and will continue till March 10 (Maha Shivratri), with many auspicious bathing dates in between. More than the millions who are visiting the vast Mela ground everyday it is the visit of those in the news that is making waves.

The Vishwa Hindu Parishad traditionally holds its conclave in every Kumbh. There is this meeting of the Kendriya Margadarshak Mandal (central advisory committee) and the Hindu Dharma Sansad (religious council) where leading personalities from the Bharatiya Janata Party (BJP) and the Rashtriya Swayamsevak Sangh (RSS) are invited, besides those from some other outfits. This year the presence of Rajnath Singh, Mohan Bhagwat, Pravin Togadia and Ashok Singhal made news for the topic of ratification of Narendra Modi's name as the BJP candidate for prime minister's post in next Lok Sabha election. But Modi himself is likely to visit the Kumbh on February 12, when a bigger news splash is certain.
Politicians form other parties - notably the Congress - are yet to mark their presence but whenever they do, it will add to the local colour.

As for entertainment personalities, actress Poonam Pandey was among the first to visit the Kumbh and take a dip. Known more for her photoshoots than acting talent, she made a picture of devotion as she stood in water with a prayer on her lips.

Celeberated actress and BJP MP Hema Malini and renowned classical vocalist Pandit Jasraj are among some other big names who are now camping in Allahabad and plan to take holy dip at the Sangam on the auspicious occasion of 'Mauni Amawasya' on Sunday, February 10, which is also the fourth big 'snan' (bath). In their quest for salvation, they have sought the refuge in the sprawling camp of Swami Avdeshanand Giri Ji Maharaj, who is also the 'Achrya Mahamandleshwar' and the chieftan of the biggest sect of Naga Sadhus, also known as Juna Akhara. They are fourtunate enough to have the blessings of their Guru, who is said to have agreed to take them along with him for the holy dip at the Sangam on 'Mauni Amavashya.'

Earlier on February 7, Juna Akhara chief was visited by Rajya Sabha MP, Amar Singh, who is virtually in a political wilderness after his break up with the Samajwadi Party.

And now Ekta Kapoor, the TV producer, is likely to visit the Kumbh for performing a yagyato ward off evil spirits. Her next movie is a horror flick revolving around a witch and even if the Kumbh Mela administration has warned her not to use the venue to promote her film, she cannot be stopped from holding a 'ritual' against evil spirits, can she?
Also not to be missed is the large number of foreigners at the venue, not only as visisotrs, journalists or photographers, but as members of teams of sadhus and their akharas. It is interesting to see so many of them donning saffron robes, performing Hindu religious rituals and preferring to be known by their new names.

Most of the people who have already visited the Kumbh say that the management of people's movement and policing are among the two features that stand out for being efficient, even though the condition of the tented accommodation may not be very comfortable or convenient.

As the winter chill has waned and bright sunshine marks the day, Allahabad looks forward to more celebrity visits in days to come.

Meanwhile, Mauni amawashya is an occasion, which is likey to witness a huge crowds. They are in fact salvation-seekers, who are coming throught several routes: unreserved railway bogies that disgorge upcountry pilgrims; homes on wheels parked apart at parking lots scattered around the Kumbh venues; Tata Sumos ferrying road trippers and bagloads of snacks for the evening antaksharithat follows the bhajansand kirtans.

With the promise of a grand spectacle, television crews have staked out vantage spots all over Kumbh area. Some of the bigger television stations have ferried in as many as eight television crews and promise to bring in more over the next fortnight so as not to miss out on the action. Security concerns are already high especially after the death sentence served on the kingpin of the parliament attack mastermind and a hardcore terrorist, Afzal Guru.
Posted by Clean Media at 00:47