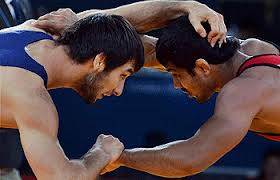 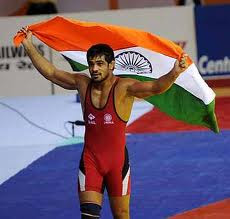 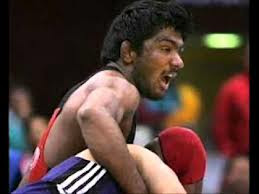 London, August 12 (CMC) India's star grappler Sushil Kumar stormed into the finals of men's 66kg freestyle category in the London Olympics, defeating Akzhurek Tanatarov of Kazakhstan on Sunday. Earlier, Sushil Kumar defeated Navruzov Ikhtiyor of Uzbekistan to enter into the semis. Sushil, Beijing Olympics silver medallist, prevailed 3-1 over his Uzbek rival to keep India's flag flying on the last day of the London Games.
By virtue of this win, Sushil had at least got to play in the bronze medal play-off tie even if he loses his semifinal bout against Akzhurek Tantarov of Kazakhstan.
In the quarter-final round against Ikhtiyor, Sushil pocketed the first period easily.
With a point in his kitty, the Indian wrestler was in total control in the second two-minute period as well till he conceded a point to his opponent in the last six seconds to give Ikhtiyor the opportunity to drew parity in the bout.
However, Sushil meant business in the final period and won it 2-0 to seal the tie and a place in the semi-finals.
Earlier in the day, Sushil came from behind to beat defending champion Ramazan Sahin of Turkey 3-1 in his opening bout.
Both the wrestlers had got a bye in the first round.
Posted by Clean Media at 16:10