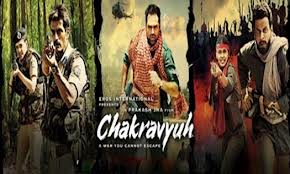 'Chakravyuh' will show the reality, says Abhay Deol
Clean Media Correspondent
Mumbai, Aug 19 (CMC) Actors Abhay Deol and Arjun Rampal, who will be seen playing pivotal roles in Prakash Jha's 'Chakravyuh', say they knew little about naxalites (Maoists) but the film has helped them understand them in a better way.
"I was aware of the situation but didn't know how organised it is and how strongly it is funded and what a big war it is. I feel that by violence and atrocities, no one will get anywhere," Arjun said at the trailer launch of the film.
"My character in the film also believes this. This is a war from which you cannot escape and together we need to find a solution," he added.
Arjun Rampal, Abhay Deol, Manoj Bajpayee, Kabir Bedi, Anjali Patil and Esha Gupta are in the star cast of the film.
Abhay believes that the situation will get worse if a solution is not derived.
"I had little knowledge about the issue. My character is stuck between the police and the tribals. I had some knowledge about the areas but got to know the extent of it and how deep the war is, after I shot the film. I have a feeling that this will get worse and the government and public needs to address it," he said.
Talking about the preparation of the role, he said: "I had a one week workshop with Prakash Jha where there was a lot of script reading. One thing good about him is that he changes the dialogues after meeting the actor. I had some knowledge on the issue so I asked him questions. He knew that I was aware of the issue."
"I have focussed more on the character development and less on the background. We used to discuss a lot and we wanted to show reality. I did a lot of physical training like running and cycling," he added.
The film is slated for Oct 24 release and also features Esha Gupta, Manoj Bajpayee and Anjali Patil.