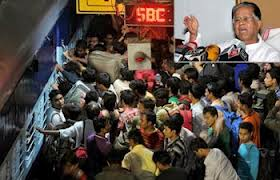 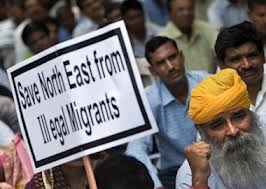 North East exodus:  Pak rejects India's charges
Clean Media Correspondent
New Delhi, Aug 19 (CMC) Pakistan on Sunday rejected India's charges that morphed pictures of Assam and Myanmar violence which sparked an exodus of northeastern citizens from other states originated in Pakistan. Such remarks only widen the trust deficit between the two countries, sources in the Pakistan related stories 'Vote bank politics of govt responsible for NE exodus'
Exodus of NE people from Pune declines: railway State govts providing enough security to NE people: Centre high commission here said.
The rumours forced thousands to flee Karnataka, Maharashtra and Tamil Nadu. The Pakistani sources said these were "cooked up" charges.
"Instead of indulging in mud-slinging and blame game, it's time for India to address its internal issues," the source told Clean Media". "Such comments only widen the trust deficit."
Singh had said India will take up the issue with Pakistan. "I am certain they will deny our information but our technical team is very certain of the information it has gathered," he said.
The government on Saturday said the bulk SMSes and MMSes that triggered panic among the northeastern people had been traced to Pakistan and a protest would be lodged with Islamabad.
“Pakistan is trying to create trouble by inciting people… This exposes its attempt at cyber warfare against India,” said union home secretary RK Singh.
In the MMSes, those who died in cyclone Nargis in Myanmar were shown as victims of the Assam violence. “Seventy-six websites were identified with morphed images. Most of these were uploaded in Pakistan,” Singh said.
The home secretary said the details would be provided to the external affairs ministry so that it could take up the matter with Pakistan.
The home ministry has banned close to 100 websites for carrying objectionable material and arrested one person to find source of the doctored MMS clips and SMSes.
The MHA has also asked Google to provide the IP address and other details of the ID from where the doctored photographs were circulated.
Assam chief minister Tarun Gogoi said he suspected from the very beginning that foreign forces were behind the rumours. "I was saying from the very beginning that foreign forces were behind this," he said.
Assam chief minister Tarun Gogoi has said that a probe will be instituted to find out facts regarding alleged involvement of foreign hands in the recent Assam violence. "From the beginning I have stated that some foreign hands are involved. It is not merely a clash between Bodos and minorities. The Union home ministry report that Pakistani elements were involved has vindicated our stand," Gogoi told Clean Media.
"We will institute a probe to find out details regarding the involvement of foreign elements in the violence," he added.
Meanwhile, in stray incidents of violence one person was injured in Dhubri district and a few houses were torched in Chirang district last night, even as curfew was relaxed for 12 hours in Rangiya subdivision of Kamrup Rural district.
Police said a person belonging to the minority community was injured at Chilkikhata, under Bilasipara police station, late last evening after a group of miscreants attacked him with arrows.
The condition of the injured is stated to be critical and he has been shifted to the Gauhati Medical College Hospital.
In another incident, unidentified miscreants set ablaze three houses at Khunkrajora under Bijni police station in Chirang last night.
Additional forces have been deployed in the area. The Army is also conducting flag marches at various places.
Curfew in Rangiya was relaxed from 7am to 7pm on Sunday. Shops and markets were open in Rangiya town even as security forces continued to maintain strict vigil.
Meanwhile, one more special train reached Guwahati this morning from Bangalore carrying around 800 passengers.
"Two special trains from Bangalore had reached on Saturday and another arrived here at around 8 am this morning," Northeast Frontier Railway PRO Nripen Bhattacharya said.
The violence in the lower Assam districts, which started on July 19-20, have so far claimed 78 lives and displaced over four lakh people.
Police have arrested sixteen people in Bangalore for assault and spreading rumours leading to flight of people from the northeast.
MPs cutting across party lines had Friday spoken in support of people from the northeast with Prime Minister Manmohan Singh declaring in both houses of parliament that everybody would together ensure that those from the region were safe in all parts of the country.
Posted by Clean Media at 16:47