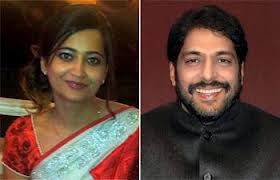 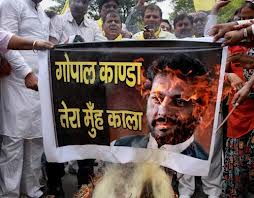 Geetika suicide case: Delhi Police to question Kanda today
Clean Media Correspondent
New Delhi, Aug 19 (CMC) Delhi Police will interrogate former Haryana minister Gopal Goyal Kanda in connection with the Geetika Sharma suicide case on Sunday. The questioning of Kanda comes after a Delhi court placed him in a week’s police custody. A designated court in Delhi remanded Kanda to police custody for his alleged role in perpetrating the suicide of former MDLR airhostess Geetika Sharma. Kanda, who had surrendered before the Delhi police early on Saturday, has so far used every legal trick and tactic available to him to stall the process of interrogation. The judge, however, has given permission that Kanda’s lawyer can meet him once a day for an hour. The public prosecutor had demanded 14 days custody, which was opposed by Kanda’s lawyer citing that there was nothing to recover in the physical presence of Kanda. Reacting to judgment, Geetika Sharma''s brother Ankit said that he hoped for impartial and fair trial. “Police has demanded remand of 14 days but they only got for seven days. This shows that he has once again misused his stature but police is doing its work and I have full faith in judiciary. This is a very good thing that he has been sent on police remand for seven days. Police is also cooperating and now the entire interrogation depends on police,” said Ankit. Sharma used to work as an airhostess in his defunct MDLR Airlines. Meanwhile, Ajay Chautala of the Indian National Lok Dal party, told reporters in Rohtak, Haryana, that Kanda has been involved in several such cases before also. He sought Chief Minister Bhupinder Singh Hooda’s resignation for trying to shield Kanda. Kanda had been on the run for over ten days since the case was lodged against him and his business associate Aruna Chaddha. The former Haryana Minister had gone underground with police declaring him an ''absconder'' while MDLR Airlines executive and Kanda''s employee Aruna Chaddha was arrested. Kanda and Chaddha were named in the suicide note of Geetika (23), who took her life on August 5, alleging that they had harassed her and ruined her life, a charge denied by both of them. Chaddha was arrested after being called in for questioning by the police, while Kanda ignored police summons to him to appear before them after rejection of his request for more time made through his counsel.
Posted by Clean Media at 16:58