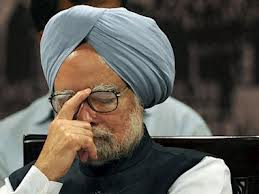 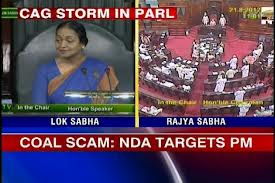 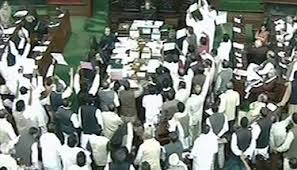 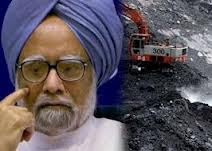 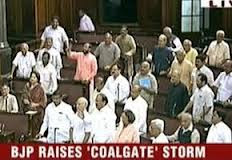 NEW DELHI, August 21 :(CMC) Both Houses of Parliament, which met after the Eid break, were adjourned on Tuesday after the Opposition disrupted proceedings over the alleged coal block scam.

Soon after the Lok Sabha resumed, Speaker Meira Kumar was forced to adjourn the House for the day, due to repeated disruptions. Rajya Sabha proceedings were on for a short period, but the House was later adjourned.

As soon as the Lok Sabha met for the day, Opposition members trooped into the well raising slogans to pin down the government on the basis of the CAG reports - focusing on allocations of coal blocks that the federal auditor says benefited private operators by Rs 1.86 lakh crore.

The issue was raised vociferously by BJP members, who were supported by their colleagues from other opposition parties including AIADMK, Left and TDP. Amid uproar, Speaker Meira Kumar adjourned the House till noon barely a few minutes after it met for the first time since the latest controversy hit the government.

In the Rajya Sabha, almost the entire Opposition led by BJP Deputy Leader Ravi Shankar Prasad and M Venkaiah Naidu, and Shivanand Tiwari (JD-U) were on their feet and raised slogans as soon as the House assembled.

The BJP-led NDA demanded Prime Minister Manmohan Singh's resignation, while Left parties wanted the government to spell out its stand on the three CAG reports.

Amid din, Samajwadi Party, which supports the UPA government from outside, protested Steel Minister Beni Prasad Verma's comments on inflation. Verma, who deserted SP to join Congress, had stated that high food inflation was good as it benefited farmers. As his plea for order in the House went unheeded, Chairman Hamid Ansari adjourned it till noon.

BJP is targeting Prime Minister Manmohan Singh demanding his resignation since he was in charge of the coal ministry during the allocations questioned by the CAG. "This is not a matter that can await examination by the PAC. The PM is culpable for the delay in introducing transparent auctions," BJP deputy leader in Rajya Sabha Ravi Shankar Prasad said.

The opposition's aggression is likely to be countered by the government with Congress vehemently rejecting the Comptroller and Auditor General's findings as a bizarre accounting exercise. The clash is expected to result in adjournments and Parliament is not expected to transact business on Tuesday.

BJP leader Arun Jaitley gave notice of the opposition's intent on Monday, saying the CAG report on coal will be taken up in a "big way" in Parliament with the party demanding the PM's resignation.

The government is preparing to stonewall the opposition, not only disagreeing with CAG's conclusions but also arguing the reports must first be examined by Parliament's Public Accounts Committee. The government is correct on procedure, but the opposition is unlikely to let go of an opportunity to yell "scam".

Government sources said there was no indication so far whether the PM would respond to the opposition's tactics by offering a statement, pointing out the matter would be addressed by the ministry concerned. Coal minister Sriprakash Jaiswal would be ready to make a statement on 'Coalgate' which the opposition can be counted on to reject.

The CAG reports are likely to spur opposition unity as BJP, Left and regional parties converge in attempting to corner the government on the alleged scams in coal allocations. The CAG reports dealing with the GMR-run Delhi International Airport Limited and the use of surplus coal by Anil Ambani-controlled Reliance Power are also sharp indictments of the UPA government.

The legislative agenda for the monsoon session does not comprise any major reform initiatives but there are several amendments that finance minister P Chidambaram is keen to push through and on which he has the broad support of the BJP. The CAG reports may end up disrupting much of the week.