A student of Kashi Institute of Tech killed, 21 others injured in an accident at Mirzamurad

A student of Kashi Institute of Tech killed, 21 others injured in an accident at Mirzamurad 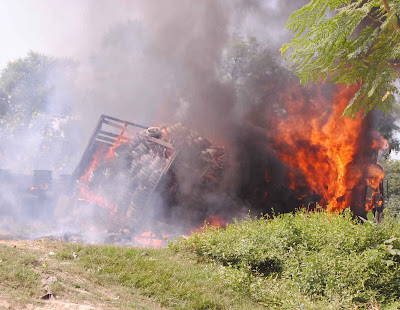 All the Photographs by Somit Bardhan 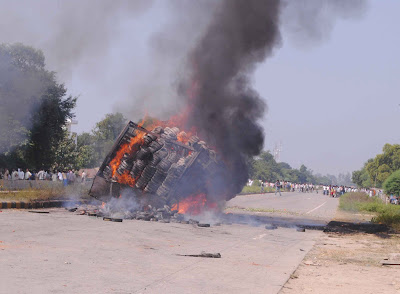 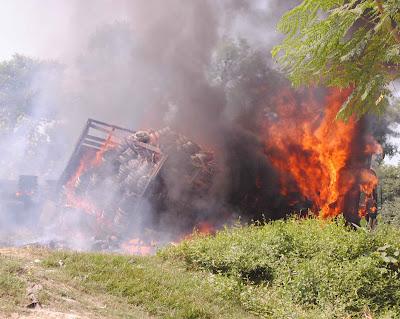 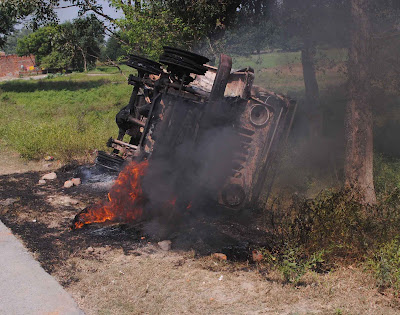 Varanasi, Oct 12 (CMC) A student of KIT at Mirzamurad on GT road, 25 kilometers from here, was killed and 21 others were injured when a high speed truck hit the College bus in the morning at about 8.00 hrs, trying to overtake it from the wrong side.
In the morning today as a bus carrying the students of the Kashi Institute of Technology from Varanasi reached Mirzamurad, 25 kilometers from here, a truck hit it from behind trying to overtake it, resulting in the death of a student on the spot and injuring 21 others, some of whom are serious.
Superintendent of Police, Rural Area, Amarendra Singh told Clean Media that the injured have been hospitalized in the nearby Apex hospital.
He said that the irate students of the KIT and Kisan Inter College burnt a Jeep and bike of police and two trucks.
Heavy police force has been deployed on the spot and the situation is now under control.
He said that the killed student has been identified as Amit Patel. No one has been arrested in the incident and the driver of the truck is absconding.
Posted by Clean Media at 15:57

Email ThisBlogThis!Share to TwitterShare to FacebookShare to Pinterest
Labels: A student of Kashi Institute of Tech killed 21 others injured in an accident at Mirzamurad