Shiv Sainiks deomnstrate at Shringar Gauri and try to do Jalabhishek at Varanasi, arrested

Shiv Sainiks deomnstrate at Shringar Gauri and try to do Jalabhishek at Varanasi, arrested


All the photographs by Somit Bardhan 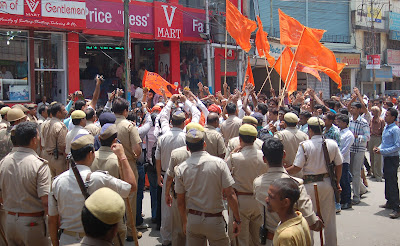 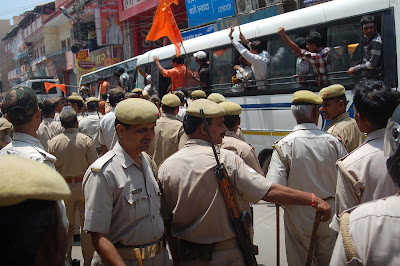 Varanasi, July 30 (CMC) Hundreds of Shiv Sainiks were today arrested while trying to worship the holy Shringar Gauri temple in the world famous Kashi Vishwanath temple compound.
The Shiv Sainiks, numbering over five hundred, in the leadership of the District President Gulshan Kapoor tried to enter the Kashi Vishwanath Temple premisis and worship the goddess but heavy deployment of the police force stopped them outside the temple and they were arrested.
Gulshan Kapoor told Clean Media that it is an old shrine of Goddess and Hindus are not allowed to worship the shrine.
The Shivsena tries to do the Jalabhishek every year at the shrine.
Posted by Clean Media at 16:04

Email ThisBlogThis!Share to TwitterShare to FacebookShare to Pinterest
Labels: arrested, Shiv Sainiks deomnstrate at Shringar Gauri and try to do Jalabhishek at Varanasi