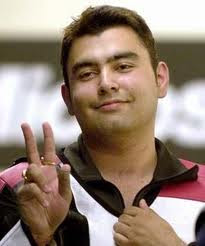 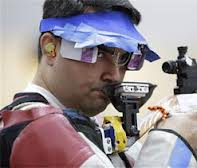 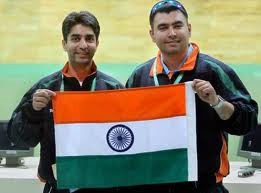 Gagan with Abhinav (on left) who crashed out in the qualifiers

Earlier, Beijing Games gold medallist Abhinav Bindra had crashed out of the 10m air rifle event at the London Olympics with a dismal display in the qualifying rounds, but compatriot Gagan Narang kept alive India's hopes by advancing to the medal round here.

Bindra, who scripted history four years ago by becoming the country's first-ever individual gold medallist in the Olympics, shot 594 out of 600 to finish a shocking 16th out of 47 competitors and lost the golden chance of becoming the world's first shooter to win two successive gold medals at the mega event.

However, Narang kept India in the hunt by finishing third with 598, a point behind world number 1 Niccolo Campriani of Italy and Romania's Moldoveanu Alin George, who both shot an Olympic record-equalling 599 to stand first and second in the qualifying round at the Royal Artillery Barracks.
Posted by Clean Media at 17:31