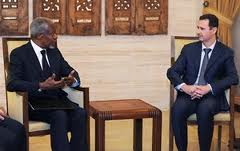 Beirut, July 09 (CMC) Kofi Annan has declared his third round of talks with Bashar al-Assad as "constructive" and suggested his stillborn plan to stop the violence in Syria may yet be revived.


The UN special envoy to Syria said on Monday that a fresh approach to end the conflict would be put to the Syrian opposition, but offered no further details.


The centrepiece of the former UN chief's plan announced in April was a ceasefire by both sides that never took hold. Instead, the violence in Syria has escalated, with daily death tolls over the past two months approaching those seen during the bloodiest days of Iraq's civil war six years ago.


Before Monday's summit, the Syrian president described Annan's plan as good. After the two-hour meeting, Assad's aides couched the the talks as "constructive and good".


Annan's office had said he would table an internationally backed plan for a transitional government. The move, which could potentially replace Assad, appeared to have won cautious support from key Syrian allies, Russia and China.


Russia said on Monday it was halting arms exports to Syria until the situation stabilised. Moscow has faced widespread criticism in Europe for attempting to send three combat helicopters to Assad's air force that Russian engineers had refitted for use in military operations against Syrian rebels.


Annan had also been preparing to ask Assad to name an envoy to meet a candidate put forward by anti-regime groups. Both sides would then be tasked with forming a transitional government.


Whether either issue was raised is not yet known. Annan offered brief and cautious remarks after the meeting, before departing for Tehran, which he described as an important actor in Syria.


Iran has remained staunchly supportive of its key ally and on Sunday warned of "catastrophic consequences" if a military intervention was launched to topple the Syrian regime.


Such a move remains highly unlikely, with Nato and the US repeatedly refusing opposition requests to commit forces to Syria. Instead, the US is offering limited logistical support to an effort by Saudi Arabia and Qatar to arm some rebel groups.


Assad on Sunday accused the US of boosting "terrorist gangs" in Syria – a term he has used repeatedly to brand the armed opposition since the uprising began 16 months ago. That opposition includes military defectors and citizens who have taken up arms and joined a guerilla force known as the Free Syrian Army.


More than 16,000 people have been killed since March 2011, with many of the deaths being civilians, activists say. Assad claimed at the weekend that more members of the security forces had been killed than opposition backers.
Posted by Clean Media at 20:22

Email ThisBlogThis!Share to TwitterShare to FacebookShare to Pinterest
Labels: Annan-Assad talks on Syria described as 'constructive'