Anna draws large crowd, Narendra Modi is on the agenda at his camp

Anna draws large crowd, Narendra Modi is on the agenda at his camp 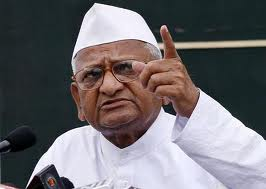 New Delhi, 30 July (CMC) Delhi woke up to a Monday without any electricity. Metro trains weren't running, so commuters hit the roads, where traffic lights weren't working because of a massive power outage across North India. At 9 am, attendance was sparse at activist Anna Hazare's protest camp in the capital.
But perhaps because it was overcast and cool in Delhi as 75-year-old Anna entered the second day of his hunger strike, or because the Left had called a demonstration against rising food prices at the same location, a few hours later it was house-full at Anna's venue, Jantar Mantar.  The crowd didn't diminish through the day, holding steady at about 10,000 people.
Anna spoke firmly about the Lokpal Bill, the anti-corruption legislation that he says the government has no intent of delivering to a people tired of immense and sordid graft. "The way this wave of protest against corruption is building in the country, I get the feeling that this government will have to bring a strong Lokpal Bill or else it will have to go," he warned.

His closest aides continued to focus on the ministers and politicians they accuse of corruption. "People praise him for introducing development," said activist Arvind Kejriwal, now on day 6 of his hunger strike. He was referring to Gujarat chief minister Narendra Modi. "Do you see him as the future of India?" he asked.  Mr Modi appears to be the latest expression of the differences within Anna's core group.  Against the advice of his closest aides, Anna agreed to share the stage twice this month with yoga icon Baba Ramdev, who is seen as strongly affiliated to the opposition BJP. On Friday, Baba Ramdev appeared at Anna's camp, bringing with him a few thousand followers who exited when he did, demonstrating that Anna may not have miscalculated the pros of a collaboration. But then Baba Ramdev went to Gujarat, and shared the stage with Mr Modi, offering generous praise of the chief minister and BJP leader. In Delhi, some Team Anna members reacted with anger, calling Mr Modi "a murderer of humanity" -a reference to the allegations that the chief minister was complicit in the communal riots that ravaged Gujarat in 2002. This morning, another Anna aide Kiran Bedi denied that Baba Ramdev had embarrassed the anti-corruption activists. She said that just as Team Anna meets leaders of the Opposition, Baba Ramdev cannot be faulted for meeting BJP leaders or others.
Anna and his activists want the government to ensure that the anti-corruption Lokpal Bill is cleared by Parliament urgently. The bill was passed by the Lok Sabha in December, but was stalled in the Rajya Sabha. It creates a Lokpal - a new national ombudsman agency- empowered to investigate charges of corruption against government servants. Last year, a 16-day fast by Anna in Delhi forced the government to promise him that the Lokpal Bill would be debated in Parliament in its Winter Session. This time around, sources say, the government does not plan to enter discussions or negotiations with the activists.
Since it began its protest in Delhi on July 25, Team Anna has been trying to provoke the sort of fervour that moved thousands of middle-class Indians to march on the streets last year, demanding the Lokpal Bill championed by Anna. But equally public are the differences within those who work most closely with Anna.
Anna's aides like Mr Kejriwal are campaigning for the government to authorise an independent investigation against the Prime Minister and 14 of his senior cabinet ministers. Team Anna has accused these ministers of graft. Among them, is former Finance Minister Pranab Mukherjee, who was sworn in as the 13th President of India last weekend. The government has refused to set up a Special Investigating Team (SIT) to study the activists' charges against the ministers.
Anna does not want the "black-listed" ministers to distract from the Lokpal Bill. He has also said, contradicting aides like Mr Kejriwal, that with Mr Mukherjee now in the top constitutional office in the country, it is no longer kosher to question his integrity.
Posted by Clean Media at 18:32

Email ThisBlogThis!Share to TwitterShare to FacebookShare to Pinterest
Labels: Anna draws large crowd, Narendra Modi is on the agenda at his camp