Fiza Mohammad, aka Anuradha Bali cremated as per Hindu rituals


Fiza Mohammad, aka Anuradha Bali cremated as per Hindu rituals 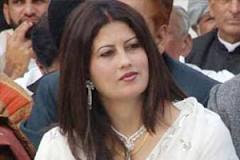 Chandigarh, August 08 (CMC) Fiza Mohammad was cremated on Tuesday by a handful of relatives. There were not more than half a dozen relatives, including her uncle Satpal, at the burning ghat.

Anuradha Bali alias Fiza Mohammad had converted to Islam and was practising the Muslim religion. She had ended her roza on July 30. The family, however, claimed that since she was originally a Hindu, her last rites should be performed as per Hindu rituals.

A few workers of Fiza-e-hind, the NGO floated by her, came to the cremation ground later on. One of the workers, Naseem Ahmed, said, “She had invited us over to break the roza on July 30. We were shocked to learn the news that she has died. We do not believe that she was under depression.”

Her friends, advocates Dilip Mahajan and Anil Kaushik, said Fiza’s death did not appear to be accidental. “It seems suspicious the manner in which she was found dead. We refuse to believe it is a case of accidental death,” said Kaushik.

Police officials said no conclusion has been reached on the death. “Till now, we have not been able to find any conclusive evidence to establish foul play in Fiza’s death” said a police official.

Email ThisBlogThis!Share to TwitterShare to FacebookShare to Pinterest
Labels: aka Anuradha Bali cremated as per Hindu rituals, Fiza Mohammad