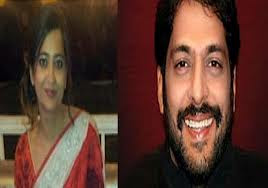 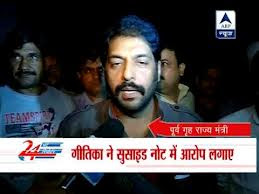 In a suicide note found at her residence, Geetika accused Kanda and MDLR official Aruna Chaddha of repeatedly harassing her.

Geetika’s family had accused Kanda of ruining her chances of working with the international Emirates airline, pressurising her to remain with MDLR.

“I want justice for Geetika Sharma. I want a CBI enquiry. This is not just a suicide case," said her mother.

P Karunakaran, Deputy Commissioner of Police(North-West), said they have now added Section 506 (criminal intimidation) of IPC in the case which was registered on Sunday. Police had earlier registered a case of abetment to suicide against Kanda on the basis of the suicide note.

Besides Kanda, the police have also sent notices to Aruna Chadha and Ankit Alhuwalia.

A team from the National Commission for Women (NCW) began its probe into the incident with a visit to Geetika's house. After a preliminary inquiry, yesterday, the NCW will further probe the matter today.

Geetika's family demanded a CBI inquiry into the case and wanted the former minister to be arrested soon.

Geetika's mobile phone, laptop and a few other articles have been seized, he said, adding the victim's family has been provided with security. Police is awaiting the post mortem report, he said.