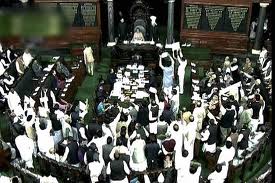 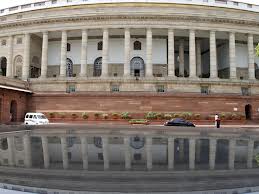 New Delhi, August 08 (CMC) Lok Sabha speaker Meira Kumar on Wednesday adjourned the House till 12 noon as the Opposition parties stormed the well demanding action on Assam ethnic violence despite Prime Minister Manmohan Singh's assurance that all issues will be discussed in Parliament.

Asked about the adjournment motion BJP plans to move in Parliament on ethnic violence in Assam, Singh said, "We welcome Parliament as a forum for dialogue".

He said a decision on his statement on Assam violence would be based on what happens in Parliament.

Singh said he hoped all political parties would cooperate with the government in smooth functioning of Parliament during the monsoon session.

"I sincerely hope that all political parties will cooperate with the government in ensuring that this session moves forward smoothly to tackle the many legislative questions which are now before the two Houses," Singh said.

The NDA on Tuesday had said it will move an adjournment motion in Lok Sabha and suspension of Question Hour in the Rajya Sabha to discuss the ethnic violence in Kokrajhar, Assam.


A view of the Parliament building is reflected on a car in New Delhi. Reuters Photo

"NDA has decided that we will not let Parliament function on Wednesday unless the issue of ethnic violence in Assam is taken up for discussion," BJP President Nitin Gadkari said at a programme in Delhi on Tuesday.

BJP parliamentary party chief LK Advani will move an adjournment motion in the Lok Sabha on Wednesday during Question Hour to press for a discussion on this issue.

In Rajya Sabha, deputy leader of BJP Ravi Shankar Prasad and his party colleague Balbir Punj will move a suspension of Question Hour notice on the same issue.

BJP had declared in the all-party meeting called by Lok Sabha Speaker Meira Kumar on Monday that it wants a discussion on this issue on the first day of the session. In case the chair rejects the NDA demand, they are likely to disrupt proceedings on Wednesday, sources said.

The main Opposition will hold a dharna on Wednesday at Jantar Mantar on the issue of communal clashes in Kokrajhar.

NDA floor leaders held a meeting this evening to discuss their joint strategy in the monsoon session.

NDA convenor and JD(U) leader Sharad Yadav said other than Assam violence, problems caused by drought and floods, FDI in retail, corruption issues raised by the CAG in its report on coal blocs allocation, civil aviation and others, power grid failure, and Centre-State relations will be raised by the BJP-led coalition.

"Our first priority is the ethnic violence in Assam. Four lakh people have been displaced. Such a big displacement has not taken place since Independence," Yadav said.

The NDA will continue to oppose reported attempts by the government to allow FDI in retail.

"Twenty two crore people of the country are involved in retail trade. The government is trying to corner them. Other countries are also putting pressure on India," Yadav said.

The Opposition parties have also given notice that they would raise the alleged spectrum and coal block allocation scams as also the controversial Aircel-Maxis deal and the handling of the Railway portfolio by Trinanmool Congress, especially in the context of the Tamil Nadu express accident recently.

Pune blasts as well as the collapse of the power grid in the north and the east are among the issues that are likely to be raised to pillory the government.

With the monsoon playing truant in several parts of the country, the focus would also turn to the drought situation amid demands for a national water policy and a better deal for farmers.

The session will be a test for the new home minister Sushilkumar Shinde, who has been made the Leader of Lok Sabha following the exit of Pranab Mukherjee, who was the chief troubleshooter of the government for eight years.

The bills include those on forward contracts, banking laws, whistle-blowers and women's reservation as also the Prevention of Bribery of Foreign Public Officials bill.

While the much-talked about Lokpal bill has not been listed for consideration, the managers have been maintaining that it would be brought up expeditiously once the report from the Select Committee of Rajya Sabha is submitted.

The bill was passed in Lok Sabha, debated in Rajya Sabha and later referred to the Select Committee.

The Select Committee is expected to give its report on the first day of the last week of the monsoon session.