Yuvraj back in T20, thanks BCCI; Ganguly surprised

Yuvraj back in T20, thanks BCCI; Ganguly surprised 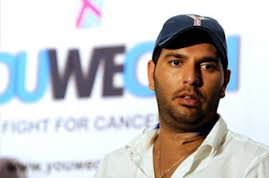 New Delhi, August 10 (CMC) Yuvraj Singh was on Friday included in the Indian cricket team for the World Twenty 20 Championship in Sri Lanka as well as the two T20s against New Zealand in September, within months of his recovery from a rare germ cell cancer.

In another interesting pick, senior off-spinner Harbhajan Singh has also been recalled to the team after a gap of one year along with veteran seamer Lakshmipathy Balaji, who makes a comeback after three years.

Yuvraj's selection was on the cards after he was declared fit by the physio and trainer at the National Cricket Academy where he had been camping for the past one month.
"Yuvraj has been declared fit, so he makes a comeback. And all of us know, if he gets going, he can singlehandedly win matches," chairman of selectors Krishnamachari Srikkanth told reporters after the meeting.

The two T20 Internationals against New Zealand, slated for the first week of September, will be a test for Yuvraj who underwent chemotherapy in the US earlier this year.
Yuvraj Singh on Friday tweeted after his selection in the T20 team and thanked the BCCI and selectors for showing faith in him.
@YUVSTRONG12 tweeted: "Can't explain how I feel ! Feels like I'm going to play for india for the first time!want to thank a lot of people."
"Specially bcci and selectors for showing their faith in me my friends and family my fans and media ! Its a special day for me," tweeted @YUVSTRONG12.
"When I was diagnosed with cancer I always thought in my heart that one day I will come back and play for india," tweeted @YUVSTRONG12.
Ever since his diagnosis, the left-hander has remained out of action since the second Test match against West Indies played from November 14-17 in Kolkata.

yuvraj singh @YUVSTRONG12 Can't explain how I feel ! Feels like I'm going to play for india for the first time!want to thank a lot of people
10 Aug 12

The selection committee took around three and half hours to decide on the two squads -- the bone of contention being the selection of Yuvraj and Harbhajan.
According to sources, Yuvraj's selection wasn't exactly unanimous as couple of selection committee members were apprehensive about picking him for the T20 World Cup starting September 18 as he has not played a single competitive match for the past nine months.
However, his class and experience in the shortest format was the logic behind his selection apart from the popular sentiment to bring him back which definitely played a part.

Ganguly surprised at Yuvraj's selection
Even as Indian Premier League, commissioner Rajeev Shukla hailed the comeback of Yuvraj Singh into the national side for the upcoming World Twenty20 championship in Sri Lanka, former India captain Sourav Ganguly has expressed surprise at the batsman's inclusion in the team.
Yuvraj has not played competitive cricket since India's World Cup triumph in April last year after he was diagnosed with a rare germ cell cancer.
"I am a bit surprised. I just wish he physically stays well because you know he has come out of a...what can I say, a big disappointment. He has recovered, which is the best thing that can happen, but it has not been a long time and I wish and pray he sustains," an apprehensive Ganguly told reporters in New Delhi.

The former skipper, however, welcomed the decision of selectors to pick off-spinner Harbhajan Singh for the T20 competition.
"He is a class act. When you play for a long time you have hiccups. But I am happy that he has made a comeback," Ganguly said.

Harbhajan's selection was simply based on his past record as India's spin department is pretty thin on experience.
Harbhajan last played for India against England at Trent Bridge last July-August before he flew back with an injury and has not been considered for selection since then.
@harbhajan_singh on Friday also tweeted: "Today's a very special day. Feel great to be selected and to represent my country again. Thanks to all of u for wishes, prayers n support."
The surprise inclusion has to be Piyush Chawla, who has done precious little in the domestic season gone by but dearth of quality leg-break bowlers was the reason behind the Uttar Pradesh player getting the nod ahead of the likes of Rahul Sharma and Amit Mishra.
The inclusion of Balaji is based on his impressive performance for Kolkata Knight Riders in the last two editions of the Indian Premier League. The 30-year-old's ability to bowl effective slower deliveries at the death has led to his selection over Umesh Yadav.
The only tearaway pacer in the squad is Ashok Dinda while the other two seamers will be the experienced duo of Zaheer Khan and Irfan Pathan.
The squad consists of eight players -- Mahendra Singh Dhoni, Gautam Gambhir, Virender Sehwag, Yuvraj Singh, Irfan Pathan, Rohit Sharma, Piyush Chawla and Harbhajan Singh -- who were a part of India's historic T20 triumph in South Africa five years back.
Gambhir being named as a deputy to Dhoni was a reward for leading Kolkata Knight Riders to IPL triumph.
Squad for T20 World Cup and T20s against New Zealand: Mahendra Singh Dhoni (captain), Gautam Gambhir (vice-captain), Virender Sehwag, Yuvraj Singh, Virat Kohli, Suresh Raina, Manoj Tiwary, Rohit Sharma, Irfan Pathan, Ravichandran Ashwin, Zaheer Khan, Lakshmipathy Balaji, Piyush Chawla, Harbhajan Singh, Ashok Dinda.

Email ThisBlogThis!Share to TwitterShare to FacebookShare to Pinterest
Labels: thanks BCCI; Ganguly surprised, Yuvraj back in T20