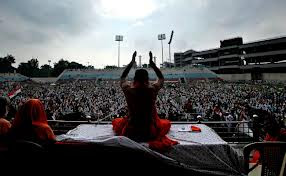 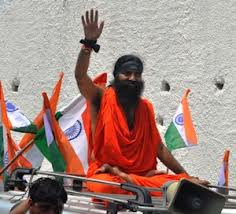 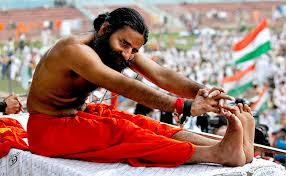 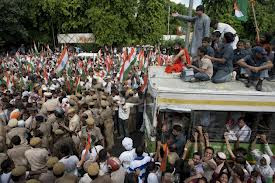 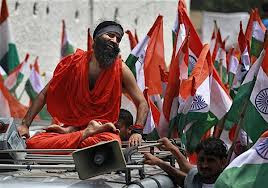 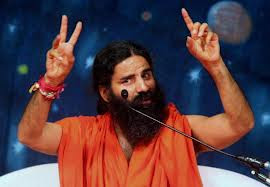 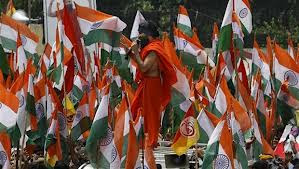 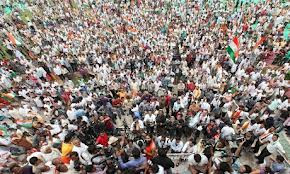 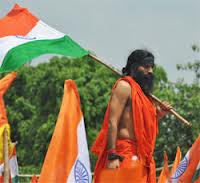 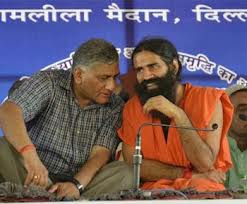 New Delhi, August 14 (CMC) Raising the political temperature, yoga guru Baba Ramdev on Tuesday accused Prime Minister Manmohan Singh of shielding the corrupt and asked people not to vote for the Congress in the 2014 general elections as he ended his five-day fast against corruption and black money.

He, however, made it clear that the anti-graft stir will continue and he was not going back defeated.
Ramdev broke his fast with lime juice given to him by two children.

"I am ending the fast but the agitation will go on till our demands are met," Ramdev told a massive gathering at the Ambedkar Stadium in central Delhi where he and his supporters spent the night after police detained them Monday while marching to Parliament.

"We will continue to fight for our rights, for bringing back black money," the yoga guru told his supporters before flying back to Haridwar where he runs a yoga centre.

Delhi Police had appealed to Ramdev and the crowds to vacate the stadium due to security reasons ahead of Independence Day celebrations.

However, before leaving the capital, Ramdev, in a politically-laced speech, lambasted the Prime Minister and the Congress-led United Progressive Alliance (UPA) government and sought to rally the crowd around the slogan of Congress hatao, desh bachao.

"He (Manmohan Singh) should show political will and honesty and if he does not show it, he will be deemed as corrupt. If he can't remain politically honest, then he should leave the post," Ramdev said in his speech that lasted an hour.

"Why are you getting yourself insulted; if you cannot bring back black money, then become a baba like me. You come from Sikh community, and many Sikh gurus gave their lives for noble cause. I request you to learn something from them and serve the country."

Holding the Congress responsible for price rise and poverty, Ramdev asked people not to vote for the "most corrupt party".

Not even one Congress member deserved to be elected in the 2014 general elections, he said.

"Congress hatao, desh bachao (Remove Congress, save the country)," he called, and his supporters echoed the call.

Ramdev's remarks evoked a sharp reaction from the government and the Congress.

In an oblique critique of the methods used by Team Anna and Baba Ramdev, Pranab Mukherjee warned on Tuesday in his first public speech as India's new President that anger against corruption was legitimate but there will be chaos if street protests become endemic.

Congress spokesperson Manish Tewari said the government had been spelling out its steps to tackle black money for the past few years and it would be wrong to accuse it of inaction.

Ramdev, who launched his agitation at Ramlila Maidan Aug 9, said he had not been defeated, but victorious by bringing many political parties on board against black money and corruption.

"Had there been voting in Parliament on Monday on black money, the government would have fallen. We have got support from parties supporting the ruling alliance," he said.

"The Prime Minister's Independence Day speech must include response on black money," Ramdev said, as thousands of his supporters cheered him.

"He should give a solution to solve corruption and black money problems, otherwise the country will hold him responsible too," he added.

Ramdev is demanding the return of black money, a strong Lokpal bill, and a transparent process to name heads of the Central Bureau of Investigation and the Election Commission.

The NDA has sought to latch on to the anti-graft movement, with BJP president Nitin Gadkari and Janata Dal-united leader Sharad Yadav Monday sharing the dais with Ramdev to launch diatribes against the Congress.

However, a day later, the Bahujan Samaj Party (BSP), which had earlier supported Ramdev, distanced itself.

BSP chief Mayawati Tuesday said her party was supportive of the black money issue but she did not agree with the way Ramdev allowed NDA leaders to make speeches from his platform against other political parties.
Posted by Clean Media at 22:34