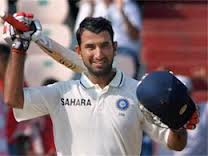 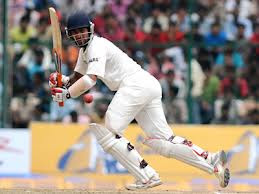 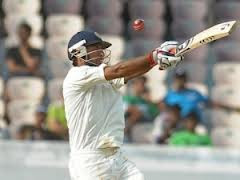 Hyderabad, Aug 23 (CMC) Cheteshwar Pujara hit an elegant century on his Test comeback as India recovered from a jittery start to finish the first day at a comfortable 307 for five against New Zealand in the opening cricket Test in Hyderabad on Thursday.

At stumps, Pujara, playing his fourth Test, remained undefeated on 119 with skipper Mahendra Singh Dhoni (29) giving him good support as the duo added 47 for the unbroken sixth wicket partnership.

After 16 years, Indian cricket's new era in Tests started at the Rajiv Gandhi Stadium in Uppal on Thursday, without stalwarts like Rahul Dravid and VVS Laxman in the starting line-up.

Pujara, who has long been considered having the requisite game to replace Dravid, showed that he has the right technique and temperament to succeed at the international level.

India had a brisk start when the opening duo of Gautam Gambhir and Sehwag added 49 runs for the first wicket after Dhoni elected to bat after winning the toss.

But the duo perished to some reckless shots as left-arm seamer Trent Boult gave New Zealand the first breakthrough in the form of Gambhir who chased an outgoing delivery to be caught behind for 22.

Sehwag, after getting a reprieve on 35, also failed to convert a fine start being dismissed for a 41-ball 47.

Seniormost player Sachin Tendulkar, also did not last long after being castled for 19 as it was left for young guns Pujara and Virat Kohli (58) to put their hand up and be counted.

They did not disappoint during their stand of 125 runs for the fifth wicket which was also entertaining due to some fine strokemaking by the duo.