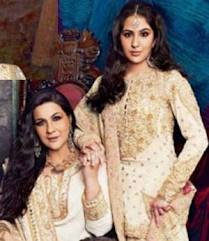 Saif Ali Khan’s daughter Sara to enter filmdom via Yash Raj banner
Clean Media Correspondent
New Delhi, Aug 19 (CMC) Amongst the fresh, young and promising bevy of newcomer Bollywood actors, there is one more name which is going to be added to the list very soon. And that name is Sara Ali Khan, the daughter of actor and Nawab of Pataudi Saif Ali Khan and actress Amrita Singh.
News has it that Amrita Singh is in talks with Yash raj Films to launch 16-year-old Sara’s acting career under the company’s banner. And if reports are to be believed, the film is said to be a romance saga.
It was when Sara posed as the cover girl of a famous lifestyle magazine that the acting offers started pouring in. But Amrita is keen to get Sara into acting through a good production house. The youngsters launched by YRF have got a good response which confirms why Amrita is pushing the envelope to make a deal with YRF for Sara’s Bollywood debut.
Although Amrita Singh has not denied the news but we are still waiting for a formal announcement.
Posted by Clean Media at 17:50