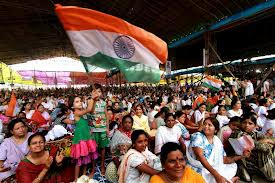 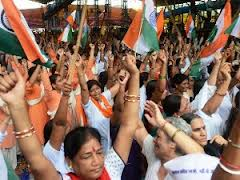 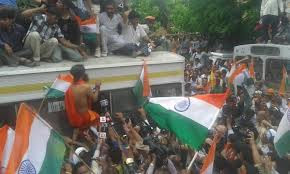 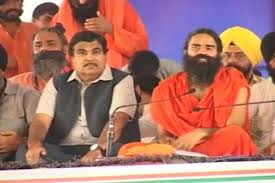 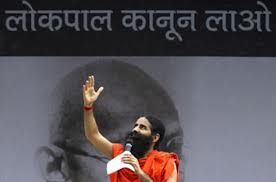 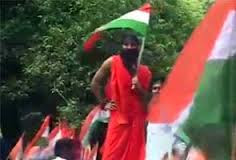 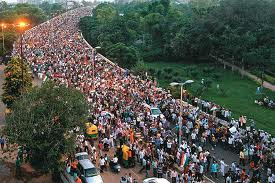 New Delhi, August 13 (CMC) Baba Ramdev's mission to take his fight against black money from the Ramlila Maidan to Parliament did not materialise as he along with his about one lakh supporters were stopped and taken into preventive custody at the Ranjit Singh flyover.

Ramdev's rally, which saw the yoga guru leading the protest rally sitting on the top of a vehicle with a black band tied on his forehead, started from the Ramlila Maidan at about 1 PM, but the police had already warned him that he would not be allowed into the New Delhi municipal limits as Section 144 was in force because Parliament was in session.
However, buoyed by the political support, particularly from the BJP and its allies, Ramdev exhorted his supporters to remove the Congress-led UPA from power while asking them to remain non-violent during the march.

While the BJP-led NDA joined him on stage, Ramdev exhorted his supporters to remove the Congress-led UPA from power.
There was high-drama after he was detained and herded into a DTC bus which had been brought to transport those arrested to a temporary jail at Rajiv Gandhi Stadium in Bawana. His supports blocked the bus and even climbed on top of it to prevent the police from taking away Ramdev.
Ramdev appealed to maintain peace and even hung from the bus window to calm down his supporters. The drama continued for more than 45 minuted before the the bus was allowed to move.
"They can only arrest me, they can't stop me from fighting against corruption," Ramdev said after his detention.

Ramdev had warned the government of a 'revolution' on Sunday. On Monday, Ramdev started the day with telling his supporters to pack their bags and be ready to go to jail. He then announced his plan, saying he and his supporters would march towards Parliament.
Ramdev's protest also saw the BJP-led NDA and other political parties coming out in his support. The stage was first shared by Janata Party President Subramanian Swamy, who slammed the UPA government. Then followed BJP President Nitin Gadkari and JD(U) chief Sharad Yadav, who also shared the dais with Ramdev.
Amidst a strong NDA presence on stage, Ramdev attacked the Congress, saying the party should be boycotted. ""We are not going to sit silently. The activists will educate the country about this movement. The Congress party should be boycotted," Ramdev said.
"It's become mandatory for the government to insult us, act badly. They can remove one Ramdev, but what about the others." he added.
Ramdev dared the government and said, "It has been decided that those responsible for corruption must be taught a lesson. The first call for uprising has gone out - Congress hatao, desh bachao (Remove the Congress, save the nation)."
While Ramdev made the 'march to Parliament' call, the Delhi Police beefed up security around the Ramlila Maidan.
At 1 pm, Ramdev started his march to Parliament from the Ramlila Maidan and asked his supporters to follow. While his supporters marched waving the Tricolour, Ramdev got on top of a vehicle, with a black band on his head, marking his protest.
The Delhi Police stopped his cavalcade at the Ranjit Singh flyover and detained him and his supporters, filled them in buses and asked them to go to the Rajiv Gandhi stadium in Bawana but his supporters sorrounded his bus and did not allow the bus to move. The hiccup continues and Baba Ramdev is protesting from the roof top of his bus itself.
Meanwhile, UPA ally Samajwadi Party said it will support anybody who fights for the cause. "Our party is against black money. Whoever talks about bringing back black money, we will support (him)," SP supremo Mulayam Singh Yadav told reporters.
Congress leader Janardhan Diwedi said, "This is a political fight. We, too, are concerned about black money. Steps are being taken to bring back black money."
The government sources also ruled out negotiations with Ramdev, saying there were cases pending against him.
Posted by Clean Media at 17:05