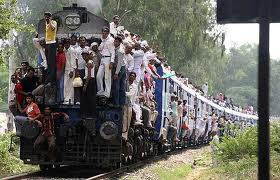 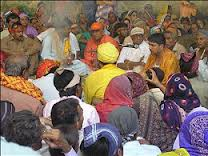 ATTARI (PUNJAB) August 10 (CMC) Tight-lipped about their future, about 250 Pakistani Hindus arrived in India on Friday evening after promising authorities in Pakistan that they will return on completing their pilgrimage.
The first batch of nearly 100 Pakistani Hindus crossed the Wagah-Attari land border joint check post between both countries after 4pm.
"We have come here on pilgrimage. Though things are not easy for us (in Pakistan), we will return after our visit," one of the pilgrims told media at the Attari check post.
Speaking off the record to the media, most of the visitors said they were facing a difficult life in Pakistan and many of them being forced to convert to Islam. They said that given an option, they would like to stay back in India.
The Hindus, men and women, were allowed to continue their journey to India by Pakistani authorities after they gave the commitment that they would return to Pakistan.
A section of media in Pakistan had speculated that the Hindus had no intention of returning to Pakistan because of alleged harassment by Islamists.
Interior Minister Rehman Malik went public Thursday night alleging a "conspiracy" against Pakistan and demanded to know why the Indian high commission in the Pakistani capital had issued so many visas to Hindus.
He refused to let the Hindus proceed beyond Jacobabad (Sindh) unless he was satisfied they would not take asylum in India citing religious persecution -- as some Pakistani Hindus had done earlier.
Eventually, after some hours, the Hindus were allowed to go after their representatives pledged the families would return to Pakistan.
"After the interior ministry orders, the Hindu families were kept waiting on the (railway) platform. They were perplexed over not being allowed to cross the border despite having (Indian) visas," the daily Dawn reported Friday.
Media reports earlier said that the Hindus had no plans to return from India following allegations that their shops and houses were looted and their women forcibly converted to Islam.
One report said that seven Hindu families comprising 90 men, women and children from Jacobabad left for India Wednesday night, citing lack of safety and security in Sindh province.
They left by train and were seen off by relatives and a large number of Hindus at the Jacobabad railway station.
Their move came six months after 52 Hindu families from the same area migrated to India.
Jacobabad police official Muhammad Younus Chandio said security was being provided to Hindus and that the families were not migrating but going to India to perform religious rites.
About 10 families of Pakistani Hindus are already camping in Amritsar, 30 km from here, and are seeking political asylum in India.
Posted by Clean Media at 00:21