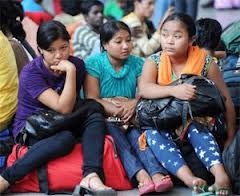 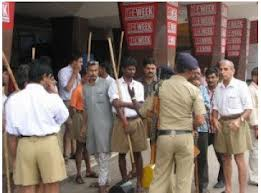 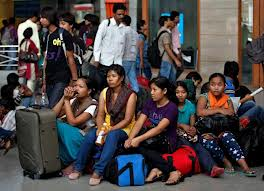 BANGALORE, August 16 (CMC) Southwestern railway has sold over 2020 tickets for passengers from northeast who had booked tickets to go to Assam by 2pm on Thursday. The authorities have announced another special train to Guwahati, departing from Bangalore City station at 8pm.

The railways have already sent over 6900 natives of northeast home by two special trains and the regular Bangalore City-Guwahati express on Wednesday night. On Thursday, the situation at the city railway station was chaotic as thousands of northeast people and Nepal, Bhutan and Tibet nationals thronged to get tickets and leave the city, as early as possible. Many of them have not even got any tickets but are not ready to get back to their houses in Bangalore.

While most of them said that they heard some news on word of mouth that there is a threat to their lives, many said that their parents called them back to their native and some others shared their experiences of being harassed by unknown people.

"We work in the TVS company and we heard it from others of our clan in the city that there is a threat to our lives. The company officials asked us to leave the city until safety is reassured. We came by a train from Hosur and now waiting here to get tickets to go to our village in Odalguri district in Assam," said Pabitro Borua.

Even security guards and office helpers from Fortis Hospital and hotel workers of Bowring Institute have informed their offices and are fleeing from the city. "We are afraid what is going to happen. We have only heard of instances in Neelansandra where some of the northeast natives have been killed. We do not know who are these people who are threatening us, whether they are Muslims or Hindus but we are just scared and we trust no one," said Akash Ali, native of Tripura and an office helper in Fortis Hospital on Bannerghatta road.

"We got calls from our families in Assam that there is violence against northeast residents in Bangalore and south India. Although we are afraid of going home because the situation over there is equally worse, but we would be rest assured if we are amidst our people. We definitely feel insecure in these states," said Nirol Nagajhari, native of Odalguri district in Assam.

Nagajhari was working in a quarry in Kerala. He is now going back with many young boys, who had come to work with him from his village, in hope of earning money and helping their families.

Most of these folks who are afraid and who have received such messages or heard from others are either security guards or hotel workers or service boys or salon employees. Students in colleges and people working in IT sector or companies in the city belonging from the northeastern states were not among the ones who are thronging the railway stations.

Railway authorities and state police have deployed platoons of police force to monitor the chaos at the stations and also to ensure their safety here.
Posted by Clean Media at 20:01