Zardari knew about US raid on Osama compound 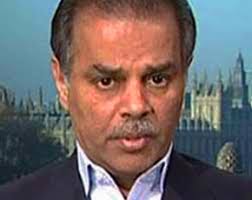 Zardari knew about US raid on Osama compound
Clean Media Correspondent
Islamabad: Mar 3: (CMC)  Controversial Pakistani-American businessman Mansoor Ijaz, a key figure in the memo scandal, on Friday claimed that President Asif Ali Zardari had advance information of the US military raid that killed al Qaeda chief Osama bin Laden in Abbottabad last year. Ijaz further claimed that Zardari had telephoned Army chief Gen Ashfaq Parvez Kayani on the day of the US raid and asked him not to use F-16 combat jets to target the helicopters carrying the American troops. He made the remarks during an interaction with the media before entering the Pakistan High Commission in London to depose via a video link before a Supreme Court-appointed judicial commission that is investigating the memo issue.
"I can confirm that the two people that are referred to in the document are... the (army chief) Gen Ashfaq Parvez Kayani, who received a call from President Asif Ali Zardari, essentially asking him to stand the F-16s down that had been scrambled to take care of the US helicopters in Pakistani airspace," Ijaz told the reporters.
"As far as I know, it was Gen Kayani and President Zardari that had that conversation. It's pretty clear." Ijaz claimed that Pakistan's former envoy to the US, Husain Haqqani, could end the memo issue by speaking up on the matter. Haqqani was forced to resign after Ijaz claimed last year that he drafted and delivered the memo to US authorities on the envoy's instructions. The memo had sought US help to stave off a feared coup in Pakistan after the killing of bin Laden. Haqqani and the government here have dismissed the claims by Ijaz, who has so far not made public any credible evidence to back up his allegations.
Posted by Clean Media at 11:51

Email ThisBlogThis!Share to TwitterShare to FacebookShare to Pinterest
Labels: Zardari knew about US raid on Osama compound