Pak, US agree ties must be based on respect: Khar 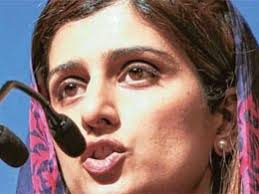 Pak, US agree ties must be based on respect: Khar
Clean Media Correspondent
Islamabad: Mar 1: (CMC)  Pakistan and the US, whose ties have been buffeted by several crises since last year, have agreed that their relations must be based on mutual respect and pursuing common interests, Foreign Minister Hina Rabbani Khar said on Wednesday. Khar made the remarks during a meeting with Prime Minister Yousuf Raza Gilani this morning, according to an official statement from the Premier's office. She briefed Gilani on her recent visit to Britain, where she also met US Secretary of State Hillary Clinton on the margins of an international conference.
he Foreign Minister said she and Clinton had "agreed that relations between Pakistan and the US were important and must be based on mutual respect." The two countries should also "be seen to pursue mutual interest at the same level," Khar said.
Posted by Clean Media at 11:17

Email ThisBlogThis!Share to TwitterShare to FacebookShare to Pinterest
Labels: Pak, US agree ties must be based on respect: Khar