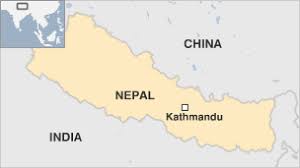 Six people die in Kathmandu market fire
Clean Media Correspondent
Kathmandu: Mar 4: (CMC)    At least six people were charred to death in capital Kathmandu after a fire broke out at city's main wholesale market of fruits and vegetables. The fire started due to short circuit from the storehouse of the main building of Kalimati Fruits and Vegetable Market Committee complex at around 10.30 PM (local time) and spread to other parts of the building, Deputy Superintendent of Police of Kalimati Police Station Tek Bahadur Tamang said.
Those killed included five persons from a family -- a security guard, his wife and three children -- police said, adding that all those killed were the locals. As per initial estimates, property worth over Rs 100 million was also gutted in the devastating fire. It took almost four hours to douse the fire after as many as six fire engines and dozens of fire fighters were pressed into service. Meanwhile, security has been tightened up in the area as a precautionary measure.
The intensity of the fire could be judged from the fact that smoke was still coming out from the incident sight till today morning. The Kalimati Fruits and Vegetable market is the main supply centre of fruits and vegetable to Kathmandu, where goods are brought mainly from southern plains of the country apart from different parts of India every day.
Posted by Clean Media at 14:11