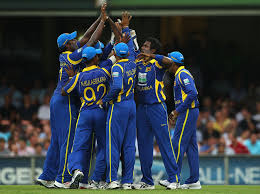 
Sachithra Senanayake brilliant catching off his own delivery gave Sri Lanka another breakthrough at a crucial time as he dismissed Christian to reduce Australia to 151/6 in 33.5 overs.


Watson played a patient 85-ball 65 knock, which include five boundaries, before Lasith Malinga clean bowled his middle stump in the 31st over. Australia were reduced to 140/5 in 31 overs with the fall of their captain.


Lahiru Thirimanne had Michael Hussey caught behind by Kumar Sangakkara to Sri Lanka a crucial breakthrough. Hussey hit three boundaries in his 56-ball 29 innings and resurrected the hosts run chase with Watson as the duo added 87 runs for the fourth wicket.


Watson completed his 26th ODI half-century off 61 balls to lead the Australian run chase after they lost their first three wickets in 5 overs in pursuit of a 239-run victory target.


The Australian run chase got off to a bad start as David Warner and Matthew Wade fell in successive overs.


Malinga gave Sri Lanka the first breakthrough when he had David Warner caught by Thisara Perera at short extra-cover in the third over.


In the next over, Nuwan Kulasekara trapped Wade plumb in front of the wicket and Malinga struck again in the next over when he had Peter Forrest caught behind by Sangakkara.


Earlier, Daniel Christian registered his maiden five-wicket haul (including a hat-trick) as Australia bundled out Sri Lanka for 238 runs.


James Pattinson made a successful comeback by taking four wickets.


Lahiru Thirimanne hit a 59-ball 51 before he was clean bowled by James Pattinson while attempting a cheeky shot over towards fine-leg.


Christian took his second wicket when Perera hit a delivery to deep mid-wicket where Michael Hussey ran back and took the catch inside play. But upon realising that he was going to go over the boundary, he threw the ball up, stepped over the rope, stepped back in, and caught the ball again.


Christian then trapped Senanayake and Kulasekara plumb in front of the wicket off the next two deliveries to complete the hat-trick and reduce Sri Lanka to 206/8.


Dinesh Chandimal hit a 84-ball 75 before James Pattinson had him caught by Clint McKay at mid-off.


Pattinson took his second wicket when he had Kumar Sangakkara caught by Peter Forrest at deep square leg.


Sangakkara hit three fours in his 64-run knock and put up a 123-run stand with Dinesh Chandimal for the third wicket to lead the Sri Lankan fightback.


Chandimal reached his 7th fifty off 47 balls while Sangakkara reached his 68th half-century off 79 deliveries.


James Pattinson gave Australia the second breakthrough when he had Tillakaratne Dilshan caught behind by Matthew Wade.


Sri Lanka got off to a bad start as David Hussey ran out captain Mahela Jayawardene with a direct hit.


Jayawardene played a Ben Hilfenhaus delivery towards slip and Tillakaratne Dilshan called him for a quick single and Jayawardene took a moment to respond. Hussey from second slip pounced on the ball with one hand and threw it at the bowler's end where his direct hit found Jayawardene so short of the crease that the third umpire wasn't needed.


The breakthrough for Australia came in the second over after Jayawardene won the toss and chose to bat.


Sri Lanka have replaced the injured Farveez Maharoof with off-spinner Sachitra Senanayake and for Australia, James Pattinson comes in place of Brett Lee.


Indian cricketers and millions of their fans would be unified in praying for an Australian victory because if the Aussies beat the Sri Lankans, India will be through to the best-of-three finals.


Michael Clarke misses the match due to a stiff back and Shane Watson, who was magnificent with the ball in the match against India, captains Australia.
Posted by Clean Media at 17:46

Email ThisBlogThis!Share to TwitterShare to FacebookShare to Pinterest
Labels: Sri Lanka beat Australia by 9 runs to knock India out of tri-series