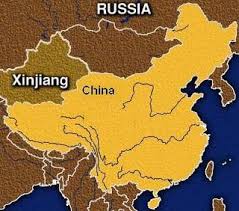 Xinjiang put on high alert after 20 deaths
Clean Media Correspondent
Beijing: Mar 1: (CMC)   China has put its volatile Xinjiang province, bordering Pakistan Occupied Kashmir, on high alert after at least 20 people including seven militants were killed on Tuesday in the region, where fresh violence has erupted. Xinjiang province's official website Tianshan said 20 people including 13 civilians and seven "terrorists" were killed in yesterday's attacks. The attacks, believed to be carried out by the militants of the East Turkistan Islamic Movement, took place yesterday in Yecheng County in the Kashgar Prefecture, neighbouring POK.
State-run Xinhua news agency quoted witnesses as saying last night that that the violent mobs chopped the victims. Official daily Global times said the attacks started at around 1800 hrs local time last evening. The attackers were armed with knives, and police shot two of the assailants dead, while also chasing other attackers in Xinjiang, home for Uighur Muslims. The region is experiencing periodic ethnic unrest for the past several years with clashes between Uighurs and members of Han community. Asked about the latest round of violent incidents in Xinjiang, Chinese Foreign Ministry spokesman, Hong Lei told reporters here today that China strongly condemned such "violence and terrorism". "At present the province is on the path of leapfrog development. The overall situation in Xinjiang is quite good" he said. "We firmly oppose a few handful of terrorists and separatist activity in sabotaging such unity and development" he said adding that the provincial administration was put on high alert to deal with their activities so that development momentum is not undermined. The province witnessed worst ethnic clashes in 2009 in which about hundred people were killed and several hundreds injured. China accused ETIM, alleged to be part of al-Qaeda network of attempting to foment a separatist movement in the province.
The Kashghar local administration last year blamed Pakistan based terror training camps for some violent incidents. In the last few years China has ramped up security in the province.
Posted by Clean Media at 10:53

Email ThisBlogThis!Share to TwitterShare to FacebookShare to Pinterest
Labels: Xinjiang put on high alert after 20 deaths